I know I have been silent here for many weeks now and I firmly resolve to write more often!  The last month has been a whirlwind of travel, fun, friends and preparing to cross over to the Bahamas for the next three months or so.  I will attempt to catch up over the next week!

When we left Georgia and crossed into Florida, I felt like we’d reached a milestone.  We’d come so far and we were finally in FLORIDA!  Our first port of call was Fernandina Beach where we decide to take a mooring ball for a night or two.  The town is super cute, with loads of shops and restaurants within easy access of the harbour.  We also found a marine store within a block and a hardware store within a couple!  These are major gifts to a cruiser to have access to these types of stores without having to take a bus, cab or bike/walk miles to find them.  The only thing Fernandina did not have was easy grocery shopping – no worries, we had loads of food on board.

We planned to stay for one or two night but, when we discovered some nasty weather was headed our way, we decided to stay on our convenient mooring ball and wait it out.  Not sure in hindsight that was a good or bad choice…

Fernandina is very close to St Mary’s Inlet, a major inlet for shipping, naval as well as pleasure boats traveling the east US coast.  As it turns out, because of the inlet, Fernandina harbour is very open and exposed to wind allowing the fetch to build quickly within the mooring field.  When the winds kicked up to 20-25 knots, we became trapped for 60 hours on the boat with no ability to get ashore.  It was too rough to launch the dinghy and even if we could, I can’t imagine what would happen if we tried get to shore. 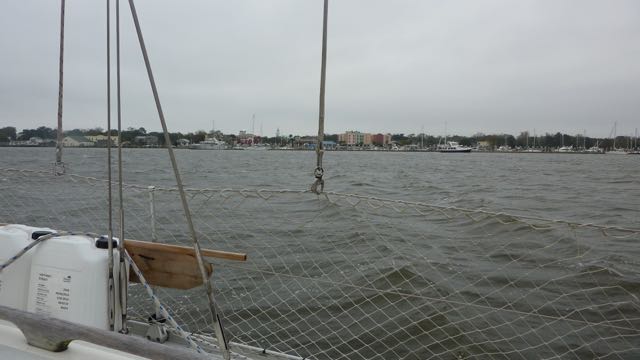 This photo was taken AFTER the big blow, but you can see how far away the shore is.  Wouldn’t have wanted to try getting that far during the bad weather.

Tim and I were fine and mostly comfortable, swinging around for 2 1/2 days, it was Poppy who had a problem…  We’ve tried to train her to go to the bathroom on what our friends call “tinkle turf”.  It’s a piece of artificial grass that we put up on the bow and have encouraged her to do her “business” on.  She wants no part of it.  She knows she can only pee on real grass, we taught her that very well. 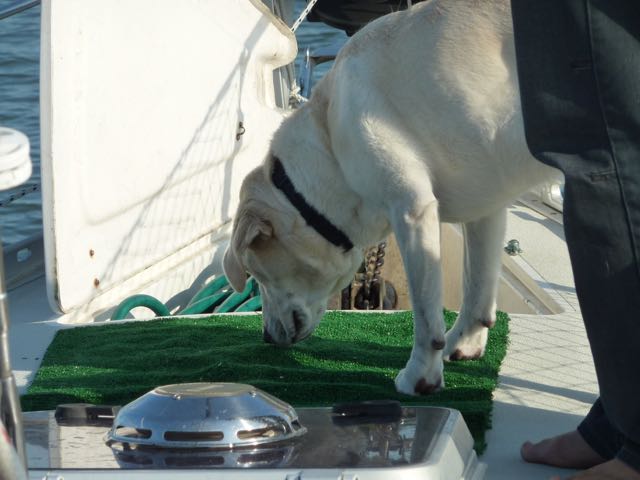 She will always sniff, never go.

We have done extensive internet research on how to make her understand that this is ok to pee on the fake grass – it seems the key to success is “scenting” the turf.  This can be done a few ways…

1) Place your piece of grass under the “tinkle turf” of another dog, so when that dog “goes” it will filter down onto Poppy’s carpet.  Then she will know other dogs have gone here so it must be ok.  We haven’t tried this one yet.

2) While Poppy is on shore, shove it under her as she is doing her business.  We have managed to make this happen – it’s not as easy as it sounds and it can be messy.

3) You can scent it yourself.  Yes, we have done this.  It was dark and while we weren’t the only boat in the anchorage, we are pretty sure the event went unnoticed.

4) If none of the above work, you can just keep the dog on the boat until she HAS to go and out of desperation pees on the tinkle turf.

Sadly with the bad weather in Fernandina, this is where and when we hoped we would finally have some success.  Over the course of the 60 hours we were trapped, we took Poppy to the bow of the boat many times a day and encouraged her to go.  The mat was well scented and she would circle, sniff and then sit down and look at you, like, “WTF?”  Around about hour 45, I took Poppy to the bow and offered her some relief with the artificial turf.  After a few cold and very windy minutes, we headed back to the cockpit, unsuccessful and I told Tim I was going to bring her down below as it was super nasty outside and she was freezing.  No sooner than I had lifted her down onto the sole of the cabin, then she squatted and pee’d… for a very, very long time.  It went everywhere and seeped down in between the floorboards into the bilge (where Tim keeps his beer cans…).  We should have said “no!” and grabbed her and rushed her to the mat, but we stood there.

It took some time to clean the boat up, rinse all the beer cans and get rid of the urine scent inside the boat.  We were hoping Poppy would think of this as an accident and that even with her “scent” all through the boat, she would not go again.  Why we think she will understand the difference between her scent being on the artificial grass and the floor of the salon, I don’t know.  We are still trying to teach her to go on the grass so that if we are trapped on the boat again because of a rough harbour, she will have a place to go and can ride out the storm more comfortably than she did in Fernandina Beach. 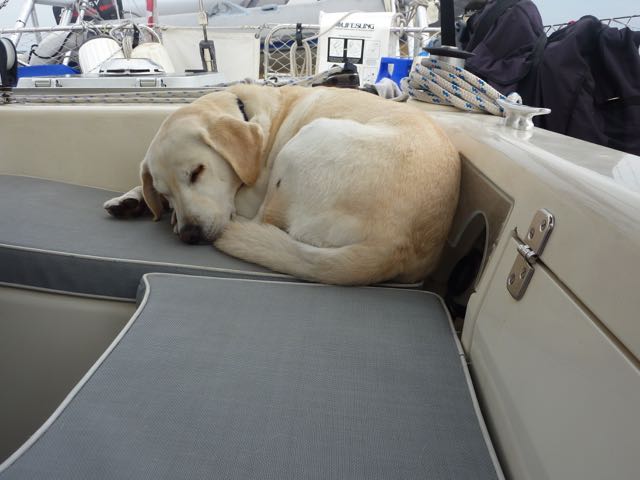 One thought on “The Importance of Tinkle Turf”