At first it’s very peculiar to be walking down the street, bright sunshine screaming out of the blue sky, everyone in flip flops and sunglasses, with Christmas music and air conditioning blasting out the open shop doors.

I was born and raised in a cold climate; Christmas in Florida does not feel like Christmas, at first.  It took awhile (almost three weeks) but eventually I became accustom to the sights and sounds and the heat; then Christmas in Florida became… wonderful.  Palm trees wrapped in holiday lights, boats rocking in their slips with lights dripping from the stays and around the lifelines, holiday parades on the water and visits with Santa outdoors instead of the stuffy mall! 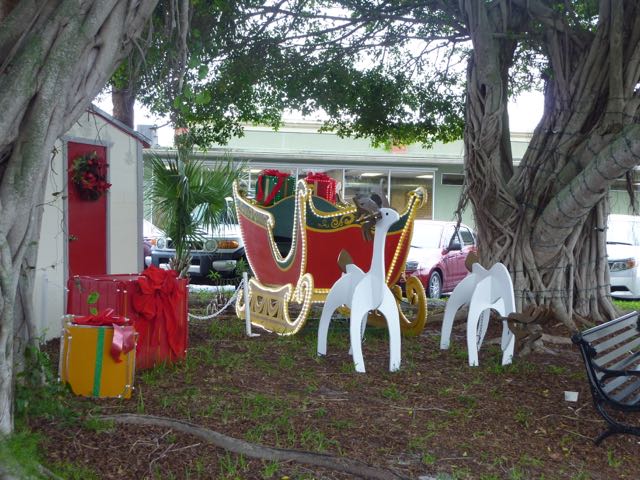 Visit with Santa in his outdoor sleigh!

When we left Toronto, I packed a few of our Christmas decorations so that it would feel familiar and Christmassy when we were far from home and in a strange place.  It was hard to scale it down and in the end, I may have brought too much.  However, we decorated the salon with everything we brought and purchased a small artificial tree for $10.  In years past, when we decorated the salon it wasn’t an issue to have decorations dangling from the ceiling and a tree on the navigation station.  But, this year having those things and trying to move the boat every few days was a bit challenging!  Every time we were waked by a Sport Fisher (Sport Fisher definition: a huge motor boat that goes super fast, and has 15+ fishing rods hanging off the back and a bikini clad woman on the bow) I ducked my head down below to see if the tree had survived the violent thrashing.  Tim eventually found a safe place to stow the tree if we were under way.

One of my holiday traditions is to make a Christmas fruitcake.  I know the vast majority of the world hates fruitcake and it has a bad reputation… but it’s a favourite of mine, especially with tea on a cold winter morning.  This year I discovered that I love it just as much on a warm winter morning!

Finding some of the ingredients was a challenge and in the end I made a few substitutions.  It’s very difficult to find Black Treacle in the South (impossible), so I used molasses instead – almost the same thing anyways.   Luckily, I bought the dried and candied fruit peel for the cake while I was home visiting my Mum in November.  It’s been hit and miss looking for those things here in Florida, so I’m glad I thought to pick them up at home. At home we also have something called “mixed spice” which is impossible to find here!  I did some research on the internet and found a recipe for making your own – it would have involved purchasing 4-5 new spices that we did not have on board and were unlikely to need again until next Christmas. Not gonna happen.  Then I discovered something called Pumpkin Spice.  It’s used to make pumpkin pie and the spices used are very similar to those in a Mixed Spice, so I bought a jar.  It worked great!  I can’t tell the difference.

It takes 4- 41/2 hours for the cake to bake in the oven, but it works just as well on the boat as it does at home in my full sized oven. 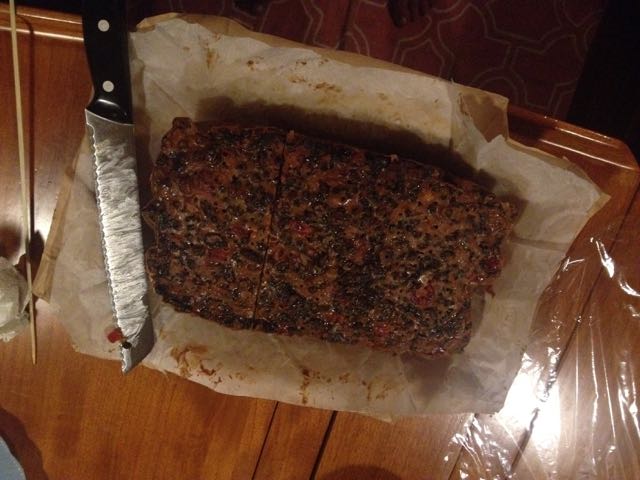 After leaving St. Augustine we headed for New Smyrna Beach just in time to catch their lighted Holiday Parade!  My “MUST DO” list included seeing one of these parades.  I’d been reading and dreaming about them for years and was very excited that our travels would land us in the right place at the right time.  Many towns from the Chesapeake to the southern tip of Florida, all along the East Coast, hold these parades anytime from late November to a couple of weeks before Christmas.  We were in New Smyrna with Deb & Ron on Scheherazade and each sat on our boats with front row seats to watch the parade!

Frosty goes fishing and catches a big one.

We couldn’t see the boat, just their lights.

After the parade it felt a lot more like Christmas, here in Florida.

4 thoughts on “A Florida Christmas”