View from my picnic table where I spent a day working.

Lately we’ve had some rolly nights at anchor and were both starting to suffer from a lack of sleep. The wind was not from its usual, easterly direction and the unusual direction was creating swells that made most anchorages near us rolly. On top of this, the cell tower at Staniel Cay was having problems which lead to loss of Internet and phone service. Normally I don’t mind being cut off from the world for a couple of days, but since I am still finishing up the contract I went home for, not having internet was a problem. The service was out for a whole day and while a bit stressful, overall not the end of the world. But then it dropped out twice more for 20 mins or so over the next couple of days and then on Thursday morning was down when I woke up at 6:30 am and still not functioning at 9 am. This is a bad situation when you are trying to prove you can easily do your job, just as well, from a boat as from an office. We decided if we left now, we could travel the 40 nm north to the next cell tower before dark. It’s 40 nm to the next tower because you have to pass the Exuma Land and Sea park which is almost 30 nm long and has absolutely no cell service. With an intermittent and  weak cell link I was able to text my office and tell them our plans.

Nurse Sharks at the Staniel Cay Yacht Club waiting for fish scraps as the fishermen cleaned their catch.

Because the wind had been pretty light and out of the south and southwest for the last few days, we were able to head out of Rock Cut and into the Exuma Sound for our trip north. The sound can be a bit rough as it’s exposed to the ocean and the easterly trades and often the bank side is a more comfortable ride. As we were headed for Highbourne Cay, travelling the Sound was going to cut about two hours off our trip while also allowing us to avoid the numerous sand bars and shallows of the bank side of the Exumas. Six hours later I had two bars and a 3G signal! While we were still two hours from dropping the anchor, I started working and catching up on the day.

As we entered the Highbourne Cay Cut, I went on deck to help get the anchor set and secure us for the night. As it turned out, this new anchorage did not save us from the rolls and swells, but at least I had 3G. Within 30 minutes of setting the anchor, the dark skies that had skirted us all day had finally arrived over head and the wind kicked up. Twenty knots, 24, 29, 30 and holding at 34, gusting to 40 knots. The anchorage was open to the direction of the storm wind and the waves went from nothing to 3 feet in a matter of minutes. Over the last 10 months we’ve gotten pretty good at setting out anchor. We ALWAYS back down HARD once it’s set and rev the engine to test the holding. Our anchor was holding in the wind and wave but as a precaution we started the engine and began watching our location on the chart plotter, so if we started to drag we could act quickly. Anytime the wind starts to pick up like this and we can see a storm coming we start going through a check list… Engine on, horn close at hand to warn other boats, chart plotter with tracking on, someone in the cockpit at all times keeping watch and fenders ready to fend off approaching boats if necessary…

This was a flat calm anchorage just minutes ago…

The Catamaran anchored next to us started to drag almost immediately. Thankfully the crew was on deck and responded fast. They were fighting the wind trying to keep control of their boat and passed by us very, very close. By the time the storm ended 40 minutes later we’d lost track of them. I don’t know where they anchored that night. We decided although it wasn’t the greatest anchorage, our anchor had held and was set well, we’d stay the night. If another storm came up, we’d feel confident in our holding.

The Cat circling the harbour with their anchor still dragging as seen out our Port window.

In the morning, after no further storms, but another uncomfortable night, , I started looking at nearby options. Allen’s Cay was only 5 nm north and looked like it would be better protected. Since I had an hour before my first phone call of the day, we decided to move the boat. Tim wasn’t overly happy as it was just 7 am and he’d only had one cup of coffee. 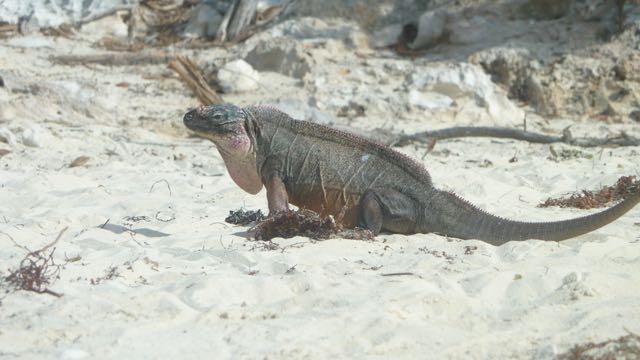 We motored over to the new anchorage, found a perfect spot between two boats already anchored and were happy with our bettered situation. I still had great 3G and was easily able to work out the day. Weather reports were suggesting we might not be able to get to Nassau the next day (Saturday) as planned and we started to think it was us and the iguanas (Allen Cay is famous for its rare species of iguanas) for the rest of the week while we waited out the next round of incoming weather. Over the course of the day another 5 or 6 boats joined us the bay and we knew we made the right choice to make the move early in the day as we had. 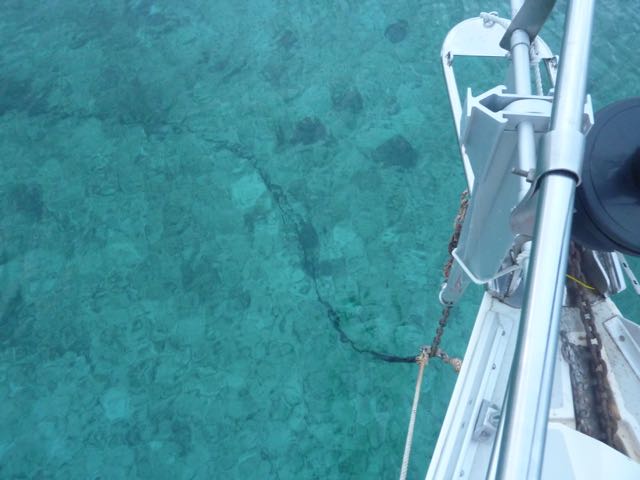 This water is about 12 feet deep, so clear you can see the anchor chain lying in the sand.